I've been doing a lot of writing this summer. The tradeoff (not surprisingly) is that I haven't been doing much cooking.

About the most ambitious kitchen adventure I've had this week was freezing milk cubes. A few weeks I blogged about my discovery of powdered coconut milk. I love that in my coffee, but sometimes you need milk - like for cereal. Stores here seem to still be having some problems with the milk supply. When I finally went to the supermarket last week (only the 2nd time since March) the milk was all very close to expiring. So I bought half a gallon and froze it into cubes. It worked really well! 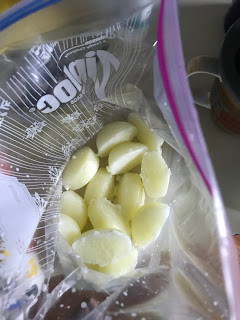 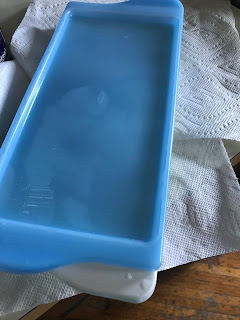 Anyway, it's July and that requires something better than milk cubes. I came across this recipe that I posted years ago. It seemed beautifully festive, so I decided to share it again.


A few years ago we ordered salads at work and I got one that had blueberry vinaigrette with red onions and feta cheese. It sounds like an odd combination, but it was very tasty. (Although way too many red onions made their way into my serving. It looked like an onion party at the bottom of the bowl when I was done!)
So fast forward to this Sunday. I had some luscious looking strawberries from the farmer's market.Emphasis on looking. They didn't taste quite as sweet as they looked, but they were good and were the first of the season, so all is forgiven. Plus they made an amazing vinaigrette! I had lettuce - romaine and red leaf. To that I added slices of avocado and diced red onion. I sliced some strawberries on top. Because I was making this a meal, I also added in some pieces of my salmon burger.It sure looked pretty. 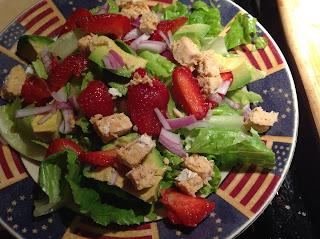 But the best part was yet to come.  I finally found a use for those Talenti jars that have been mysteriously accumulating. :)First I mashed some blueberries and strawberries. I added them to the jar with some red wine vinegar and olive oil to taste. I mashed some more, then put the lid on and shook. 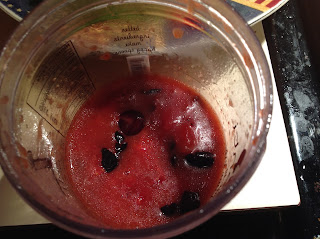 I drizzled it over the salad. (Doesn't that sound like a fancy chef word? I drizzled it. Better than I dumped it on top.) 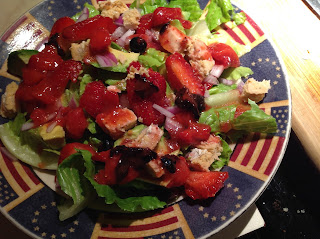 The salad was so delicious and so refreshing that I made it again on Monday. This time I added sliced almonds and they gave it a fabulously satisfying crunch.Oh - the red onion added just the bite the salad needed. I accidentally left them out on the second night and their absence was noted. :(We've talked before about my tendency to add fruit to salad. Where do you stand on that?
Posted by Cate Nolan at 12:00 AM