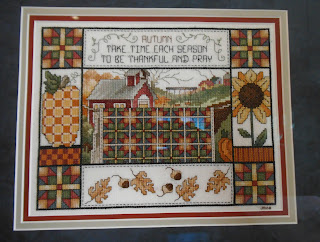 We'll be prepping for Thanksgiving today and tomorrow since the rest of the week will be packed to the brim with other things!

Wednesday evening I'll set the table for our expected crowd of fifteen and prepare the relish plate (you might call it crudite, but my Amish forebears would think that is too fancy of a word!) The last thing on Wednesday will be the centerpiece to make the table festive - I'm still thinking about what that will look like!

All this prep means a peaceful Thanksgiving morning for hubby and I. We'll be sipping our cups of Cranberry Tea and watching the sun shine on the mountains instead of bustling around to get ready for our friends and family at noon!

Cranberry Tea? I shared the recipe several years ago in a post with a Thanksgiving story starring the characters from my Love Inspired book, A Home for His Family. Since then I've updated the story and changed it to Christmas, but the recipe is as good as ever!


I hope you enjoy both the story and the recipe!

Christmas for the Colbys

Nate Colby paused at the edge of the clearing to get his bearings. Ahead of him, one line of tracks marred the pristine snow of the mountain meadow. They were his tracks from early this morning when he was fresh with the hope of finding game for his family’s Christmas dinner. Those tracks were straight and sure. Tonight? He glanced behind him. At least the approaching dusk hid his stumbling trail. Exhaustion was taking its toll.
This winter of 1878 was turning out to be a hard one here in the Black Hills. Most of the miners, their claims played out or sold to a bigger outfit, had gone south and east for the winter. Back to their city lives in hopes of finding a job to sustain them until spring when they could come back to Dakota and try again. The gold fever never let a man go once it grasped ahold of him.
But Nate hadn’t come to these hills for gold. He had come to make a home for his family. A home in a harsh wilderness.
He shifted the Sharps rifle to his left hand and started across the meadow. Even without meat, they wouldn’t starve. The fifty-pound bag of beans and a few sod potatoes in the root cellar ensured that. And if he had to….
Nate shifted the Sharps back to his right hand again.
If he had to, he could butcher one of the heifers.
He shook his head at the idea. No man ate his breeding stock unless he had nothing else.
The deep snow, soft from the winter sun, clung to his snowshoes like spring gumbo. He veered right at the far end of the meadow, avoiding the nightmarish Deadwood Gulch. Even in the best weather, a man could break a leg trying to navigate between the digs along the creek. And with snow covering the scattered mines, you never knew when the soft blanket would give way and you’d find yourself with one foot dangling in another man’s broken dreams.
Trudging along the ridge, Nate searched through the possibilities of making tomorrow’s dinner special. Something to celebrate their first Christmas in the Black Hills. Something to help Olivia, Charley, and Lucy forget the anniversary of the fire that killed Nate’s brother and his wife, the children’s parents.
Would any of the stores in town have sweets? Not likely. The last bull train bringing supplies had come through more than a month ago. A freighter or two still made the trek to Deadwood if they could, but the last wagon that had made it through just before the last storm had hauled pans, picks, and shovels. Supplies that wouldn’t be needed until spring.
Some beef from Slaughterhouse Gulch on the north side of the valley? Too dear. He had spent all his cash on the cattle for his ranch.
No, they would just have to make do with the beans and potatoes.
Rounding Lexington Hill, Nate stopped, drinking in the sight of the cabin nestled under the shadow of the rimrock. His claim had been scoured by the miners in ’75, and then ignored. But the acres of grass in the high mountain meadows stretching in front of the cabin had been exactly what he had been looking for.
His gold was in the fifty bred heifers he had brought in from Montana last summer and his pair of Morgan horses. In his dreams, Morgan foals romped on the rich grass of these pastures. They represented a future for his family.
They meant the future for Coop’s family, too, if his partner ever got married and settled down. He missed Coop, but the young cowboy had gone west to spend the winter with his parents in Oregon. He’d be home in the spring, but until then, they’d have to get along without him.
His pace quickened at the sight of a sleigh in front of the house. The MacFarlands had come. Did they know how important tomorrow was for the children? Sarah might have told her aunt and uncle, James and Margaret. Olivia had shared the tragedy with Sarah, confiding in the woman who had once been her trusted teacher.
Sarah.
The thought of her put new energy in his steps. He tore off the cumbersome snowshoes as soon as he reached the front porch. As he swung the door open, James and Margaret looked up to greet him. The scene was as homey as he could wish, with the older couple sitting in the two chairs on either side of the fireplace while Sarah stirred a pot on the stove. Olivia and Charley stood on either side of her, leaning in to breathe in the fruity, spicy scent that filled the cabin.
“Uncle Nate!” Five-year-old Lucy slid off Margaret’s lap and ran to him, grabbing his leg. “Sarah is making tea. Berry tea!”
“Cranberry tea.” Olivia grinned at Nate over her shoulder, her cheeks pink from stirring the tea. She missed her mother more than any of them, but the sadness that had once haunted her eyes had disappeared since the wedding in October.
Charley, with all the energy an eight-year-old boy could muster, ran to Nate and started pulling off his coat. “Wait until you taste it! And they brought turkey, too!”
Nate glanced at James. The preacher smiled broadly. “The folks back home remembered us with a missionary barrel and sent it by special freight. It arrived this morning. The cranberries are straight from Maine.” He shook his head as if still unable to believe the blessing. “The Lord takes such good care of us.”
With one arm around Lucy’s shoulders, Nate caught Sarah’s eye, returning her smile. Cranberry tea and turkey to make this Christmas special? It was only one of the miracles that had happened since he had made Sarah MacFarland his wife.

And here's the recipe: 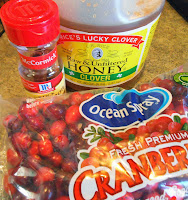 Cook the cranberries in a dutch oven or stock pot in two quarts water until they pop. Literally. When they get hot enough, you'll hear them popping in your pot! 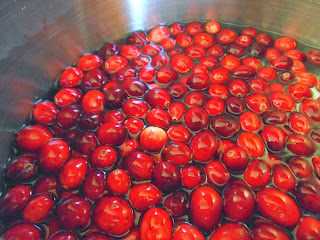 Let them cook for a few minutes, and then strain out the cranberries - either with a strainer, or pour the tea through a colander, reserving the juice. and then put the juice back into the pot.

Save the cranberries, though! You'll want to use them for cranberry relish on Thursday!

Put the cinnamon sticks in the juice, and let simmer for about ten minutes.

Add the honey, lemon juice, and an additional two quarts water. Heat to boiling, then reduce to a simmer.

You can remove the cinnamon sticks at any time, but Sarah likes to leave them in to get all the good flavor out! 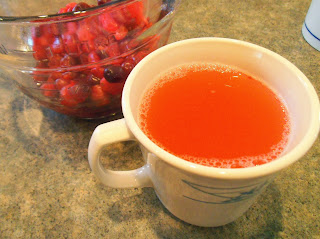 Serve the tea hot, or refrigerate the leftovers and drink it cold. This is a great drink when you have a cold or the flu!

Have a great Thanksgiving!

Jan Drexler spent her childhood dreaming of living in the Wild West and is now thrilled to call the Black Hills of South Dakota her home. When she isn’t writing she spends much of her time satisfying her cross-stitch addiction or hiking and enjoying the Black Hills with her husband of more than thirty-seven years.