I love carnitas tacos. I mean REALLY love them. I get them every time we eat at certain Mexican restaurants (the ones that do them really well). So recently, I decided to try to make them at home.

I got a Boston butt roast. I considered using the Instant Pot but settled on the slow cooker because the recipes I found were simpler (and I had a busy day). 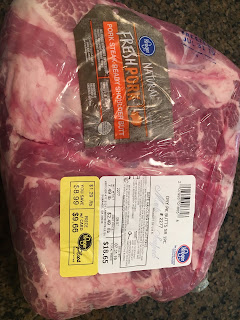 Of course, I lined the Crock Pot for easy cleanup. 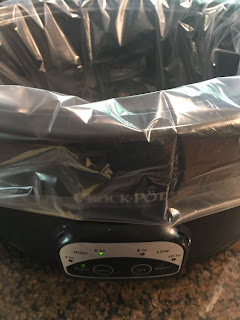 I looked at several recipes but didn't follow any exactly because I didn't have everything I needed (the usual for me). One thing I needed was an orange! So be sure if you make it to have an orange on hand.

Here's the main recipe that I based mine on: Melissa d'Arabian's at Food Network.

I rubbed the roast with salt and pepper. Then I mixed oregano and cumin with canola oil and rubbed it on the meat. Then I put it in the cooker and topped with onion and garlic. I planned to do 4 hours on high and then turn it down until dinner time. 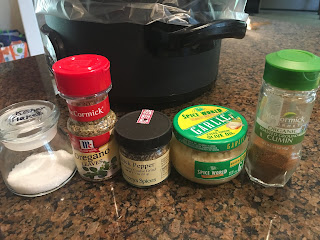 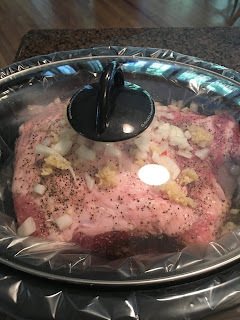 But when I went to check it and turn it down, it wasn't tender at all! Most of the recipes called for a 2 pound roast. So I dug the package out of the garbage can to see how heavy my roast was.

I took the meat out and let it cool for a while so I could shred it. Then I heated oil in a skillet and put some of the shredded meat in. I pressed with a spatula (and later weighted it down with my dad's Lodge cast iron meat press I inherited). It got nice and crispy and yummy! 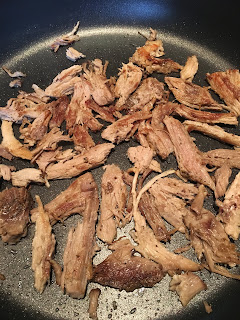 One thing I love about my favorite restaurants is they top the tacos with cabbage. And some even put on pickled onion. It really makes the dish.

I love mine on corn tortillas (heated in the skillet alongside the meat). My husband likes his on flour tortillas.

I topped mine with cabbage (I bought pre-packaged coleslaw mix!). My husband ate his with salsa and avocado. They turned out really good! 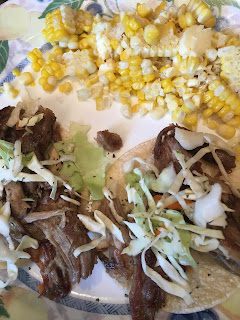 Next time, I'll definitely buy a smaller roast (I had used Kroger pick-up service that time and they had chosen the roast for me). And I'll also have that orange to add a little zest and juice. But overall, I was pleased.

Of course, my favorite Mexican restaurants don't have anything to worry about. I'll still show up often, because they have the best chips and salsa! :)


www.missytippens.com
Posted by Missy Tippens at 12:01 AM