Happy Birthday to Me

I'm not usually this self-centered, but since I haven't cooked anything recently, and I'm all out of neighborhood sites to share, I figured I'd share a little about my birthday with you.

I have to start out admitting that it was a really hard day realizing that this was now my second birthday without Ted. Somehow just saying that blows my mind. How can it have been so long already? (Really it's just 15 months, but my birthday was 3 months after his passing.)

But I was determined not to spend the day wrapped in sadness so I made plans with my daughter to see a Broadway play and have dinner first.

It's funny. People always assume that since I live here I see plays frequently. Not true. First, too many $$$$. Second, I just don't think to.

But a few months ago, my daughter asked me to go see The Ferryman. She said it was a play she would have seen with her father, so she hoped I would take his place. They loved to do theater together. We scored tickets for the week before it closed.

Watching that play reminded me how much I enjoy theater, so when I saw Natasha Kern recommending What the Constitution Means to Me, it reminded me that my daughter and I had talked about wanting to see that before it closes on August 24th. So we got tickets for my birthday. 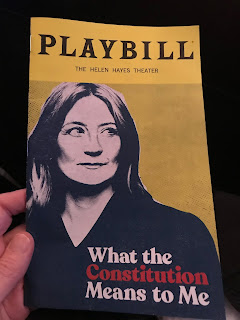 It was an interesting play with lots of politics - some I agreed with and some I didn't - but it really made you think about the U.S. Constitution and some landmark cases, about whose rights it protects (explicitly and implicitly), and whose it doesn't. (And everyone got a free pocket copy of the Constitution). What struck me most was the high school student/actress who stole the show! She was amazing!!!!

Before going to see The Ferryman, we went to an Irish Pub/Restaurant I remembered going to with Ted many years ago - O'Lunney's in Times Square. It seemed appropriate for the play. We were going to do something different this time, but in the end decided to just go back since we'd enjoyed it so much.

So I figured I'd just share dinner with you.

The first time I had fish and chips which was fabulous. Tonight I had Shepherd's Pie which was absolutely amazing. My only complaint was that it would make such a great winter dish, and the restaurant was so gorgeous with all the wood and glass, that I found myself wanting snow falling outside the beautiful window and a fire blazing while I ate it. 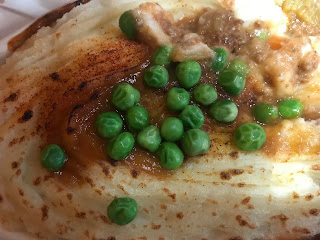 I forgot to take photos until we had started to eat, so these photos are partials.


My daughter had crabmeat crusted cod with mashed potatoes and some veggies. 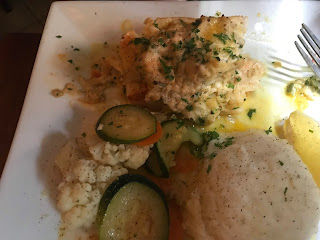 I tried to get some photos of the pub. It was still fairly empty at the time we went. 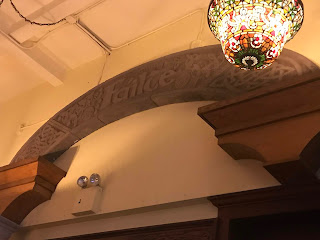 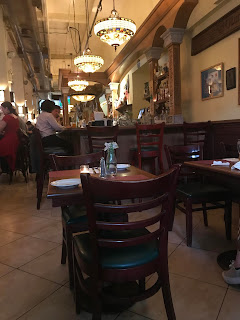 Oh, and dessert. I joked that maybe I was the only RWA member who left Nationals without getting cheesecake at Juniors. We made that up after the show tonight. They had KEY LIME CHEESECAKE which may be one of the most delicious desserts I have ever had.

I dove right in, forgetting to take a photo again until I'd eaten half. Sorry. 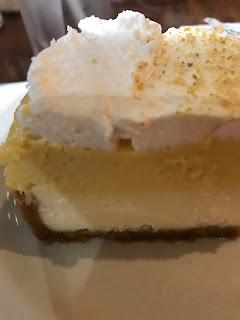 Let's talk theater (and food, always food). Have you seen anything recently that you loved (or hated)?

Anyone have a good recipe for Shepherd's pie? I plan to make some this winter, but I want the recipe for their sauce. It was SO good.
Posted by Cate Nolan at 12:04 AM