This past Tuesday I cooked a special dinner for my husband for Valentine's Day. I was excited to surprise him with lobster tails! I had gone to my new favorite store, Sprouts, and found they had discounted the lobster tails for the holiday. Only $5 each! I decided to cook lobster for the first time in close to 30 years.

Last time--back before we had kids, I bought a live, fresh lobster. I was so excited to cook something so fancy! I went home and got out my big soup post. I put the water on to boil. Then... well, I realized I had to put that poor thing in the water. But I'd seen it done on cooking shows, so held my breath and dropped it in.

And those claws clacked against the sides of that pot.

I screamed, I cried! I nearly got sick. And when my husband came home, I told him the lobster was all his. I could not eat one single bite of it. LOL

I've eaten lobster a time or two at restaurants since then. When I saw these tails, I figured I could handle that. This method worked much better for me. :) 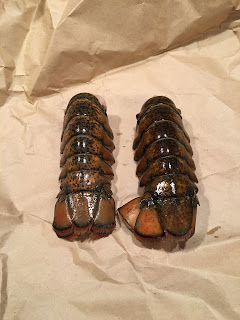 First, I found a recipe to use to get some idea of how to cook the meat. I found one from Giada De Laurentiis. Click here to see the original recipe, Lobster Tails with Clarified Butter on FoodNetwork.com. 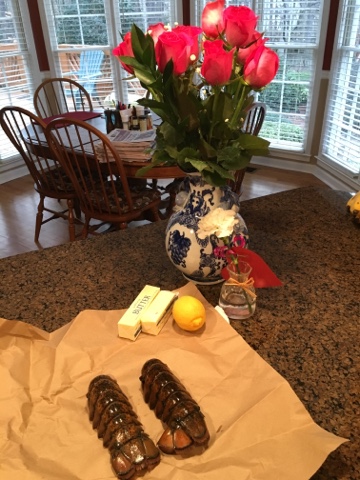 I clarified butter by cooking on the stovetop until it bubbled and separated. Then I skimmed off some of the foam. Then I poured it into a glass measuring cup and let it sit for a few minutes. The milk solids settled to the bottom. 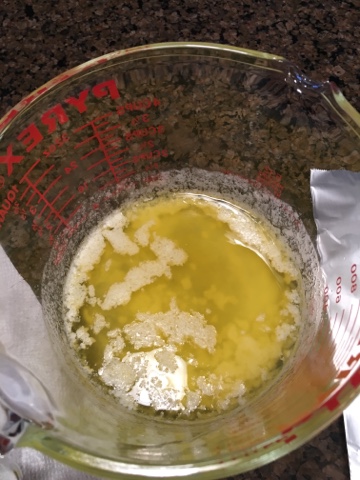 I skimmed off some more foam, then poured the clarified butter away from the solids. Ta da! It worked pretty well! I impressed myself. :) I added a squeeze of lemon juice to this butter and set it aside for dipping later.

Then I took more butter, melted it on the stovetop, and added a squeeze of lemon juice as well as a dash of garlic salt. This butter would be for cooking the lobster.

Like Giada said to do, I took my kitchen scissors and cut along the back of the shell. I placed each tail on a sheet of foil. Then I brushed butter on the whole tail, as well as into the cut shell, coating as much of the meat as I could. I poured the rest of the butter over them and then wrapped the foil tightly. I nearly had a fail, though, because while trying to hold the shell open for the butter, the edges cut the foil. Butter started running onto the counter. 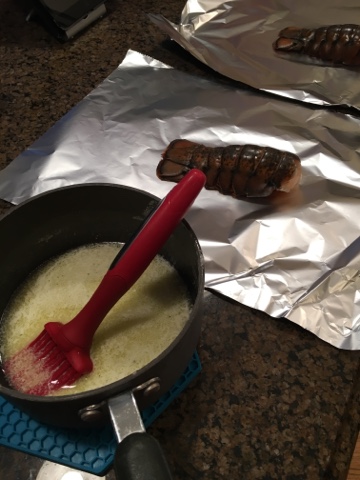 So I folded the packets into another layer of foil. In Giada's recipe, she cooked in a fire pit on the beach. I used my stove top grill pan and cooked on medium heat for 10 minutes. These were small, 4 ounce tails (wish I had bought two for each of us!), so they cooked quickly. 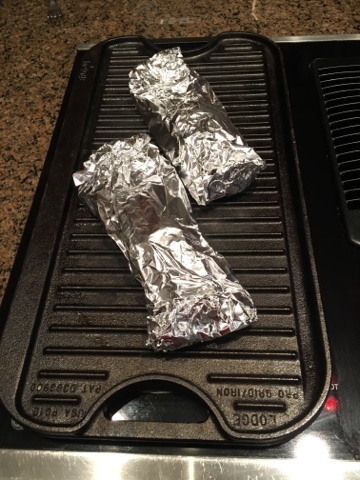 Once done, I served with the clarified butter. An amazing dinner!! I'll definitely do it again sometime. https://www.facebook.com/missy.tippens.readers/
Posted by Missy Tippens at 12:01 AM