Hello everybody! The Fresh Pioneer is back with a delicious dish that I've adopted.


I had tamales when I was younger, maybe once or twice, but since hubby is from waaaayyyyy down South, I've learned to enjoy them a lot more often. Like, at least once a month from the 'tamale lady' who goes door to door in our neighborhood. And at Christmastime.

Making tamales is a labor-intensive process and I'd tried it once before. Once. That tells you something. It was a tamale fail.

But I was ready to try it again.

Because hubby really loves tamales. And misses his family. And feels very far from home this time of year. So, I went to our local big box store and bought this... 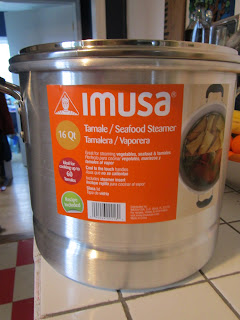 You can't make tamales without a special pot. Well, you can try. but I'd been down that road before and I was ready to put my money in with my desire to make some edible ethnic food. 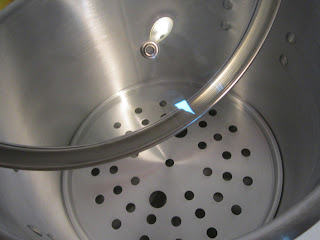 There's the insert on the inside. It comes out, and you fill it with water up to that line. The lid is glass and has a special little hole for steam. So it doesn't explode. 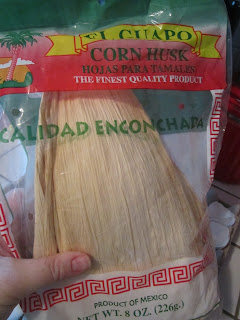 Corn husks. Because otherwise it's just not right. 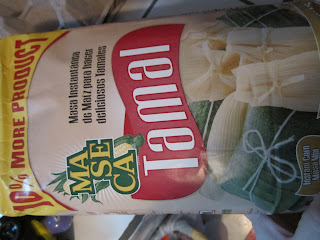 And a bag of masa instante FOR TAMALES. Now, while I was in the store, I grabbed a bag labeled 'masa' and was going to put it in my cart.

A Hispanic woman in the aisle next to me, shook her head and said in Spanish, 'No, that's for tortillas.' She took it back out of my cart and put it on the shelf. Then she grabbed THIS bag and put it in my cart. Then she patted me on the shoulder and said, 'Buena suerte'. ('Good luck')

My daughters were cackling at this exchange. True, I did have a big tamale pot, pork, seasonings, and corn husks. But still. I was a little startled at her powers of deduction.

And I almost followed her home. I just love bossy old ladies. LOVE THEM. She saved our tamales. Bless her. I wonder if she'd adopt me if I asked nicely. 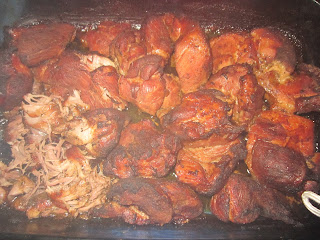 Here's the pork coming out of the oven. It's very spicy, or seasoned, because it's going to be wrapped in bland mush.  Doesn't that look delish??? Mmmm. So, 2 tsp black pepper, 1 1/2 tsp salt, 2 tsp oregeno, 1 tsp garlic powder, 1 tsp onion powder mixed in a bowl for every 4 pounds of meat, sprinkled over the top in one layer. Bake at 350F for sveral hours or until cooked to death.

I used pork because hubby asked for that or 'cabeza' which is cow head.

I was not cooking a cow head. Nuh-uh.

(Kav, dear, I also made sundried tomato and cheese tamales and they were delicious! I thought I got pictures, but noooo. Just hunks of meat photos. So use your imagination. For those I mixed 2 c grated cheese and 1 c. sundried tomatoes and 2 tsp salt, then added it to the masa mix. Perfectly not spicy for the little guys.) 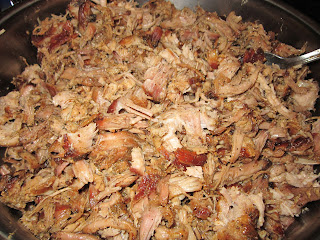 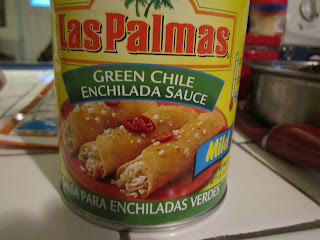 I like a bit of chile flavor but not too hot, so I added 1/2 cup of this to the pork. Hubby can add his own burn-your-lips-off salsa. 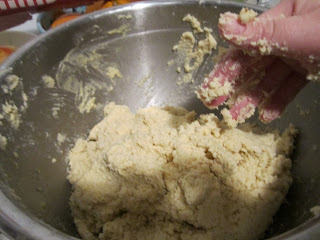 Make the masa according to the package instructions (which includes butter, salt, baking powder, 5 cups of chicken stock.). It says mix by hand. Ick. Edna was laughing the whole time. So barbaric of me. 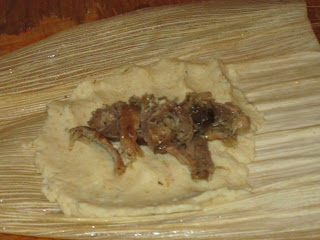 After we've washed, soaked and dried the corn husks, we're ready to assemble. Spread the masa mix in the center and add the meat. Roll completely and fold. If it's the veggie version you can just spread a layer of the mix and roll. 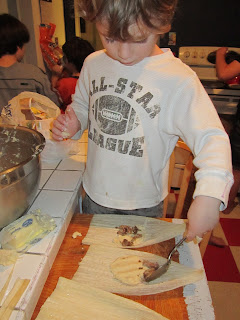 Oooh, helpers. This should go really quickly. I think. 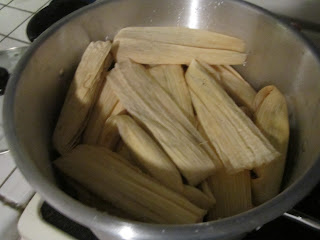 Some people layer the tamales flat, like so. Some put them end down, with the open end at the top. But my mother in law lays them flat, so therefore THEY MUST LAY FLAT. You know we don't mess with the family recipes. It would cause marital strife. 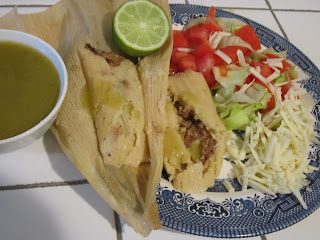 Let them steam (simmer) for one hour or a little less. Until I took them out of the pot, I wasn't sure if they'd even turn out. But the angel of the big box food aisle had rubbed some of her tamale magic on me and TA-DAH! Edible tamales!! 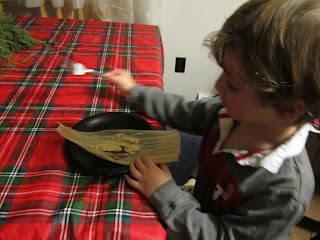 Mmmm, time to eat. The good thing about tamales is that they freeze well. So I've heard. Ours were gone the next day, but I think they save well in the fridge for a week and in the freezer for several months. 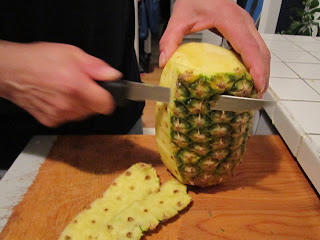 And for dessert, fresh pineapple! Num.

I hope everyone had a wonderful Christmas full of peaceful time with family and many blessings.

See you again next week when Edna returns from her vacation and insists on making an impossible dessert. Because she's that type of girl. Demanding the impossible. And getting results.

Posted by Mary Jane Hathaway at 12:00 AM