You see, I got on the scale this morning.

During the school year, I'm running all day long up and down stairs, walking around the classroom, walking almost an hour altogether to and from the subway.

In summer I sit and write.

Even walking the dog doesn't help because he doesn't much like walking in the heat either.

But I decided to be kind to you and give you a lovely recipe to enjoy before I head into heavy-duty healthy eating. Warning: I've already been preparing the beets and kale.

But let's forget about that for today.

I have something so tasty you won't care about the calories. At least not while you're eating. 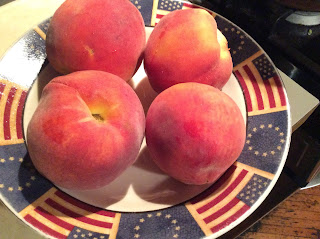 For the past few weeks, Facebook has been taunting/tempting me with a recipe for Peachy Praline Upside Down cake. Have any of you been getting that in your sidebar? It shows up in mine at least once a day.

So of course I had to look.

It's a recipe from Taste of Home.

Here's the link in case you want to make the real thing. Taste of Home Peach Praline Upside Down Cake.

I didn't want that big cake - mainly because I'm the only one here who would eat it. But really because it involved separating eggs and whipping the whites... and well, I just wanted something simpler.

Then I remembered a praline shortbread I'd had a few months ago from the farmer's market. It was pretty good, but lacked that home made taste.

So, why not combine them.

The first part I cribbed from Taste of Home.
2 sticks of butter softened
2/3 cup of sugar  (They call for brown. I used coconut palm sugar which is brown ;)  )
1 tsp of cinnamon (They added ginger but I skipped that. Nut meg might have been tasty.)

You mix all of that together over low heat until it's a yummy, gooey texture spread across the pan
bottom. 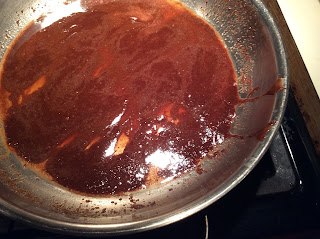 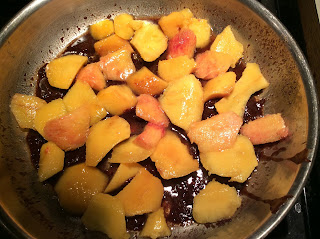 Then you layer peach slices and pecans. I used 4 peaches and a bunch of handfuls of pecans. 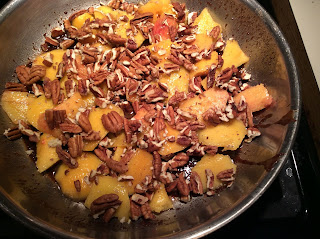 Next, with bows to King Arthur Flour, we had shortbread. You can find that recipe here:
King Arthur Flour Shortbread Recipe.
2 sticks of butter, 1 cup of confectioner's sugar, and 2 teaspoons of vanilla.
Cream everything together, then add 2 cups of flour.

Mix well and spread over the peaches. Bake at 350 degrees until done.

The recipe for the shortbread says about 35 minutes, but I found that it took longer this way because the peach praline mix made the dough take longer to cook. It tasted really good after 35 minutes, but it wasn't thoroughly cooked. 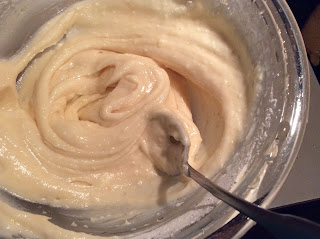 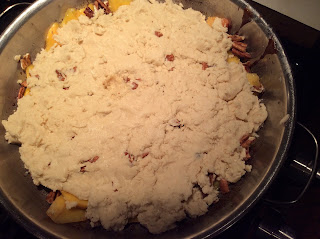 The finished product - a perfect accompaniment while I write.

Note: It is very rich, hence the small serving. But oh so delicious! 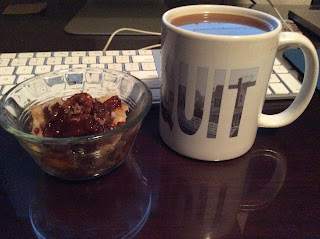 This is sort of like the cobbler Jan shared last week, but upside down and caramelized. 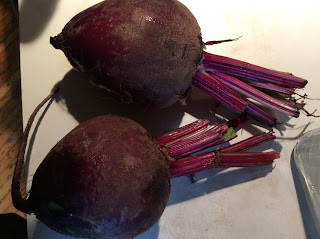 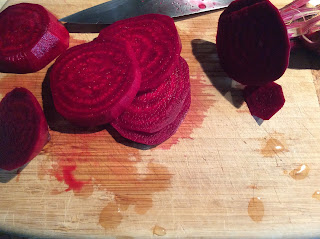 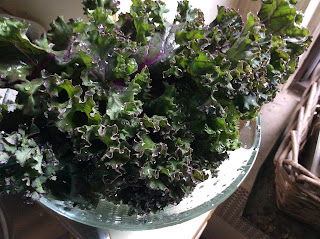