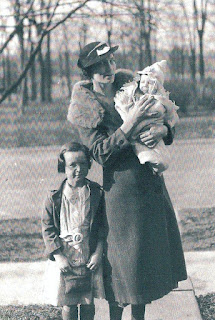 Jan here, getting ready for one of my favorite holidays!

What is it about Thanksgiving that brings out the best in us? We spend a whole week or more preparing for an entire day of giving thanks. And when we do it right - the giving thanks part, not the preparing part - aren't we blessed with the best day ever?

One thing I give thanks for quite often is my family - past, present and future.

This is a picture of my mom (the little girl in glasses), my grandmother (looking more stunning than I ever remember her looking!) and my uncle, Johnny, taken in 1936. These are the people who gave me my love for pies (and books, too, but that's another story).

My grandmother taught home economics before she got married, and was well prepared to be a wife and mother. Then the Great Depression hit - and Grandma used her skills to feed her family very frugally.

My dad says one of his first memories of his mother-in-law was noticing how thin her pie crust was. She got more pies out of a batch of dough than anyone else he knew.

My mom never felt she was as good a cook as her mother, but I think she was better in the kitchen than she realized.

This picture is her in 1940 at age eleven, with a cake she baked herself. Not bad, right?

This side of the family - my mom's side - is Church of the Brethren from way back. Like back in Germany in the 1600's.

My dad's side was Amish, became Amish-Mennonite, and then Brethren.

And that's a huge pie heritage that I inherited. 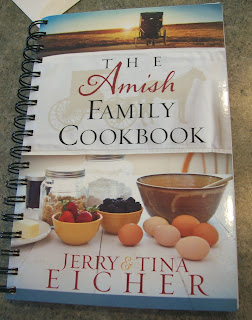 So when I was asked to review this new cookbook by Jerry and Tina Eicher, I turned to the pies, first thing. And of course there are pie recipes in an Amish Cookbook! 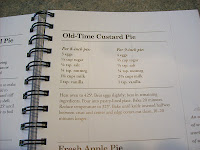 Since Friday, the 9th, was my Mom's 83rd birthday, I decided to make her favorite kind of pie - Custard.

The Eicher's cookbook has a the same crust recipe as I use, but since it only makes enough for one pie, I did cheat a bit as a reviewer - I used my own pie crust recipe.

So we'll start with the crust. 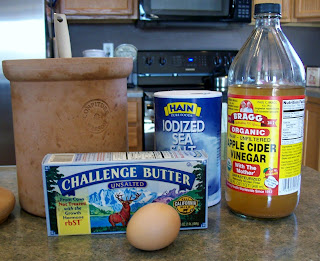 Blend the flour and salt in a medium bowl.

Cut in the shortening. I like to use butter, but it also makes a great pie crust with lard or vegetable shortening (i.e. Crisco). The butter gives you a better tasting crust that browns more easily, but the lard or shortening gives you a flakier crust.

Anyway, cut in the butter or shortening, and then beat the egg in a separate bowl, and add the vinegar and water. The amount of water you add will depend on the humidity on the day you make the crust. It's a good idea to start with the lesser amount, and then add more later if you need it.

Pour the liquid into the flour mixture, and mix well. The dough should be able to stick together, but not be sticky. If you aren't able to form the dough into a ball, add a bit more water. If it's too sticky, sprinkle in a little more flour.

Now, you need pie plates. Here's a look at my collection. 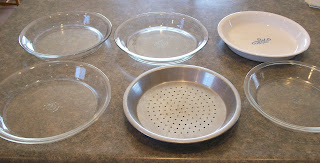 The three on the top are ones I've had for years. The bottom three are ones that were my mom's, and I rescued them (along with a van full of other stuff) from my dad's garage sale last spring. I normally use an 8" pie plate, but one of my mom's is a 9".

One thing I like about this custard pie recipe is that it gives you the ingredients for either an 8" or 9" pie.

Now, divide your pie crust dough into thirds, and roll out one third on a floured board or counter.

Try to keep the thickness of the dough even - but, you know what? Nobody will notice if one side is 1/8" thick and the other is 1/4" thick.

This next step is where a dough scraper comes in handy. A spatula would work, too.

Carefully lift the edges of your pie crust, lifting the crust as you loosen it, and lay it over your free hand. 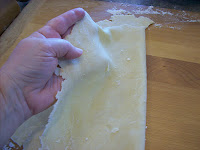 When you've folded over half the dough, loosen the remaining half, but leave it on the board. 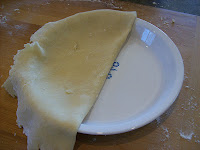 Now get one of your pie plates, and ease your folded dough onto the plate.

Carefully...carefully...fold the top half of your dough over to the other side of the pie plate. 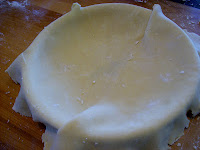 Next it's time to ease the crust down into the plate. You don't want to just push the dough into the corners - that stretches the dough, and as it's baking, it will shrink back to its original size.

So lift and ease the dough into the plate.

Now the fun part. Do you remember the scene from Disney's Snow White movie where Snow White is making a pie and the birds carry away the scraps of the crust as she trims them off? Lift the pie plate up, angle a table knife along the edge of the plate and slice around the edge of the pie. Sorry, I can't guarantee cute birds will show up! 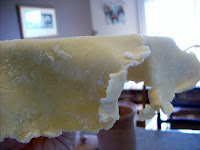 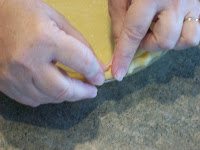 Final step: crimp the edges, and your pie crust is ready.

How do you crimp the edges? Pinch the dough between your index fingers and thumbs of both hands, more along the crust and repeat the motion, over and over until you've gone all the way around. 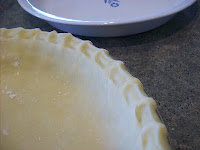 Yes, it's a skill worth developing :)

Ingredients for an 8" pie: 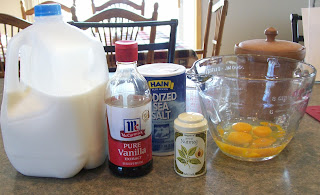 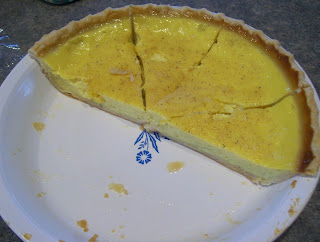 As you can see, I didn't get a picture before the vultures descended.

And yes, it tasted that good!

My mom would love a bite, but since she lives 1000 miles east of the Black Hills, I'll just have to eat her piece.

Oh, and remember that my pie crust recipe makes enough dough for three pies? I rolled out the crust, put it in pie plates, and stuck the other two in the freezer.